I’m working on a new Flash game. I’m about one-third of the way done, but it’s probably far along enough to put up a screenshot: 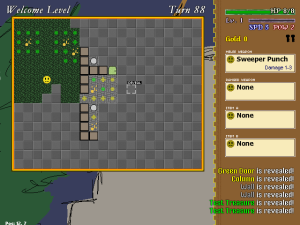 PitSweeper 2 is going to be the first sequel to a game that I’ve made, and I’m aiming to make it my most complete and polished one as well.

I’ve made a few games so far, and I feel that while I like to make games with interesting ideas, I don’t polish them as thoroughly as I could. With PitSweeper 2 though, I’m going to focus on execution and refinement; the fact that it’s a sequel helps.

My goal is to make this my first game to get a sponsorship before release, and so far I feel I’m going to do it.

Here’s an unordered list of improvements over the first game, and other comments:

That’s all for now. Next progress report will probably focus on the story and background of the game.

A scrolling space shooter. Your odds were bad enough against the enemy forces, but they've mastered a strange technology called 'auras' - particle fields that can bend or reshape bullets in midflight.

Poor little Sweeper has to make his way to the bottom of the Tyrant's Pit, using whatever equipment he can find along the way - and his valuable skill of "sweeping". A cross between Minesweeper and a Roguelike game.

An abstract matching puzzle game, that starts out simple, and turns gradually more active as you gain additional rules and powers, and a higher quota to make.

CotG Desktop is an AIR application I wrote that was a playing assistant for the pro-wrestling card game, "Champions of the Galaxy", from Filsinger Games. It was designed to streamline and automate gameplay for the card-and-dice game.

BISE is the BeInteractive Scripting Engine. It's a scripting engine that uses a subset of Javascript for its language. It can be embedded in Flash or Flex projects that need a scripting language. It has the ability to compile and run arbitrary strings of code, link functions to the outside Flash program, and pause in mid-script for user input.

This is the AS3 port of the scripting engine, ported from the original AS2 version at be-interactive.org.